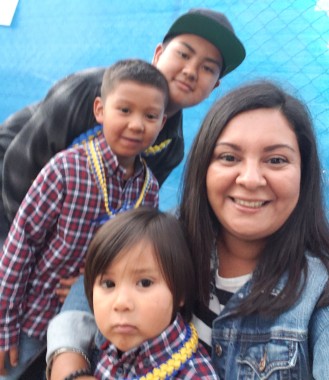 Many moons ago when I gave birth to my very first baby boy I had such a hard time dealing with people thinking I was the nanny. My little guy looked nothing like me, an almost nine pound butterball baby with big chachetes and two little slits for eyes. He looked just like dad who is Japanese. I would be so offended when I would tell folks, “He’s mine” and people would respond, “Noooooo. He looks nothing like you.” I knew that, I also knew I carried him for 40 weeks, had swollen feet, migraines, and delivered that big ol’ baby myself.  During this time I was also having a hard time nursing and was suffering from some major PPD. Those comments would break me. With time, I got over it…kind of, and since I’m what my family calls a Xerox machine had two more boys that looked nothing like me, so I got used to all of the stares and questions. I got lots of practice explaining to folks that my boys were indeed mine, and was so close to pulling the chichi out and nursing them, but people would have just said, “Look at this woman, who does she think she is, Salma Hayek?!”  Aunt and grandma come over and hang out often, I can see the confused look on people’s faces trying to figure our family out when we are in public or at least try to figure out what my role is.  Once, after a basketball game the coach told everyone to thank my son’s mom for the snacks and they all looked over at his aunt and said, Thaaaaaaank you Kai’s mommmm.” I just about died. That moment brought back so many feelings. I let them  know real quick and everyone laughed it off.  Clearly I still need to work through some stuff, but just in case anyone is wondering who I am, yo soy la madre, even made that my IG handle.

Makes me wonder how other parents and multicultural families react to these situations. Do your children look more like one parent than the other? Have you ever been confused for being the nanny?

View all posts by hijosdesumadre

This is a text widget, which allows you to add text or HTML to your sidebar. You can use them to display text, links, images, HTML, or a combination of these. Edit them in the Widget section of the Customizer.
Loading Comments...
Comment
×
%d bloggers like this: